Post-Globalization G-20 Counter Summit: Statement on the Situation in Syria 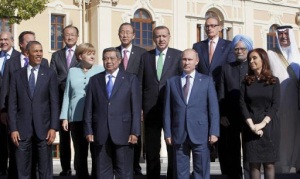 4th September 2013
Grassroots organizations from all over the world have come together in St. Petersburg, Russia, September 3-4, 2013, to hold accountable the policies of the G-20 group of industrial nations and their failure to effectively address the critical issues of growing global inequality, financial crisis, environmental destruction and military conflicts.
We are meeting at a time of great suffering in Syria. We stand united in demanding that outside powers stop adding to the violence in Syria, and specifically to refrain from bombing sites inside Syria. Social movements should be on standby to protest any such bombing. There is no way that this escalation of violence can improve the situation in Syria, and it will only add to the suffering of the Syrian people.
If Syria is attacked it will no doubt lead to increased suffering of Syrian people who will be the victims. Moreover it will lead to further insecurity in the region. We do not know what reaction the Syrian government will have against its attackers, neighbors, or own people.
We note that the Arab League has already made a statement against military intervention and we concur.
There is no doubt that use of chemical weapons is a crime against humanity. However, the singling out of chemical weapons as the only crime against humanity is a narrow view of the crisis as it unfolds in Syria.  More than 100,000 people have died because of this conflict and failure of leading international powers to bring concerned parties to the table.
All outside forces who have contributed to the conflict in Syria should now make commitments to not only support an inclusive peace process to include financial commitments to help in the rebuilding of Syrian society and healing the wounds of war.Such a meeting should consider establishing a working framework for convening all parties involved in this conflict, Arab countries, Iran, Turkey, other states and all members of the different opposition groups collectively referred to as the “Syrian Opposition.” As any meaningful resolution of the Syrian conflict will require a convention of all parties to this conflict. The G20 heads of state should seek such multilateral and multi-party approach toward ceasefire, a political solution, and program for national re-construction of Syria and re-settlement of refugees.